Thanks to our violinist friends who love to know what violin string brands famous violinists liked or used in their careers. Some of these are taken from photos, public concerts, endorsements and interviews. While it's interesting to know what some of the great players used 10 or 20 years ago, the present can be even more interesting in that because there are so many different variety of gut, synthetic, metal core and so many different combinations of alloys used today, it's fun to see what “they" are using today. 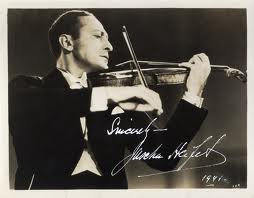 Yascha Heifetz: Goldbrokat Medium E, Plain Gut A&D, with some kind of wound G. This you can see from most of photos on this album covers throught out his career.

Nathan Milstein: a Eudoxa G&D, plain gut A and Goldbrokat E in the 1960’s.

David Oistrakh: Eudoxa D and G, Prim Steel A (or Chromecore) and a Prim E.

Henryk Szeryng: Used a Eudoxa D and G, a Kaplan A and either a Gold Label E or Kaplan E

Isaac Stern: Used the Eudoxa A, D, G and a Goldbrokat Medium E. Later in his career he switched to Dominants.

Pinchas Zukerman: Used Eudoxas until the Dominants came out which he still uses (including the E, I think…).

Itzhak Perlman: Used Eudoxa in his early career than switched to the traditional combo of Dominants with the Gold Label E.

Maxim Vengerov: Used to use Dominants but recently switched to a full set of Pirazzi.

Ilya Gringolts: He uses Evah Pirazzi at the moment.