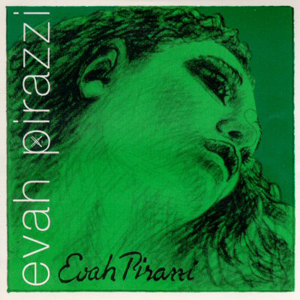 With the onset of modern technologies now used in violin string manufacturing there are several 'new' strings that have that 'old' sound so many people love from a violin. Evah Pirazzi violin strings (made by Pirastro), are made with a synthetic fiber core. These violin strings tend to be extremely responsive, warm, but at the same time have an added “brilliance" not usually found on other 'like' minded strings (made with synthetic cores). It's hard to have a warm and responsive, with a tad of “brilliance" that cuts though the deepest orchestra halls, but the “Evahs" do just that!

One of the first strings also using the same synthetic core idea was also Pirastro's Obligato strings. Obligatos still, are a great string, but the Evah's seem to be winning more favor with some of the world's brightest violin soloists. If you haven't tried the Evah Pirazzi violin strings yet, but have been using Obligatos, chances are that you will really enjoy the Evahs.

Evah Pirazzi violin strings tend to have a solid tonal fundimental and there is very little break in time with the strings. Most already know that they stretch like crazy the first few hours or so, so don't put them on just before a big performance! They come in 3 gauges, weich (or light), medium and stark (heavy). There is not an exact formula as to what works on each and every violin, but most tend to start on the mediums and experiment with a couple of different tension strings afterward. Go ahead by try a set today.